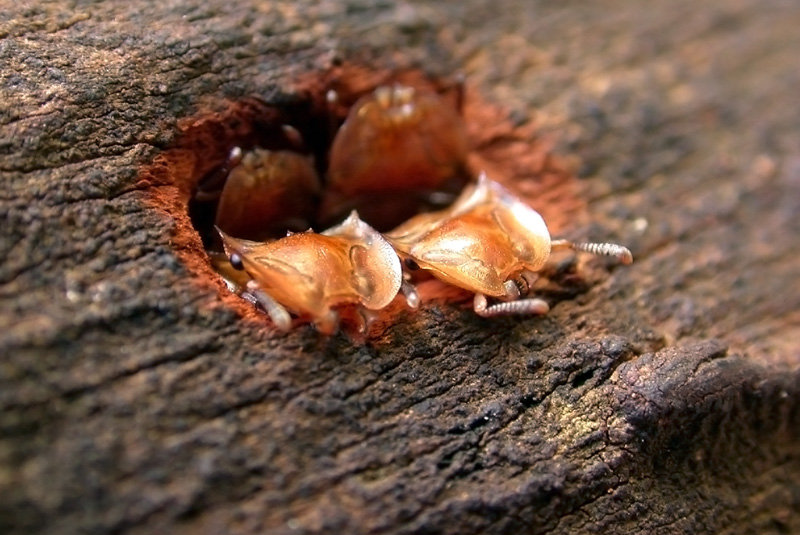 The human gut microbiome, what microorganisms might be found in our digestive systems and what roles those microorganisms have, has been in the news lately (see the National Microbiome Initiative). The human studies build on research on other organisms such as cows and termites, which have long been known to have archaea, bacteria, and protozoa in their digestive tracts to aid in the digestion of cellulose. What about our favorite creatures, ants? Do they have any gut microsymbionts?

It turns out quite a few species of ants do have endosymbiotic microorganisms in their guts. Studies in the last two decades have shown that ants in the genera Tetraponera, Acromyrmex, Atta, Dolichoderus, Camponotus, Colobopsis, Polyrachis, Echinopla, Cephalotes, Cataulacus, and the ponerine ants Dinoponera lucida, Neoponera curvinodis, Pachycondyla striata, Odontomachus brunneus and Odontomachus bauri have specific bacteria associated with their digestive systems. It is likely more examples will be found as we continue to investigate other genera.

In some cases the ants also have specialized structures associated with the bacteria. For example, some species of Tetraponera have a pouch off the midgut where symbiotic bacteria are housed. Lanan et al. propose the proventriculus (located between the crop and midgut) in some species of Cepahlotes turtle ants acts as a filter to help conserve gut microsymbionts by preventing contamination by other bacteria entering with food. Camponotus ants (and their close relatives) have bacteriocytes, which are cells that house endosymbiotic bacteria of the genus Blochmannia.

Why do ants have gut microsymbionts? As with other animals, the microsymbionts help provide nutrients not accessible by standard digestion, such as vitamins, amino acids, or sterols. Apparently, adult worker ants of many species obtain most of their nutrition from plant fluids, such as directly from nectaries or indirectly from honeydew of insects feeding on plants. Plant fluids are low in amino acids (nitrogen), so the microsymbionts help generate nitrogen sources in exchange for food and a protected environment (Russell, et al.) In fact, Davidson et al. have suggested the presence of gut microsymbionts is what has allowed ants to become so abundant in tropical rainforests.

Seems we have much to learn about how microorganisms are involved in ant digestion and nutrition.

References (links go to journals, most with free .pdf available)

This site uses Akismet to reduce spam. Learn how your comment data is processed.